Kefalonia really is a beautiful place, the locals told us we were mad to visit in winter as it is so quiet but we loved it and it actually worked in our favour (quiet beaches = fabulous free camping spots, something you wouldn’t get away with in the busy season). Plus the island is much greener in the winter and even though there were some stormy nights (we were lucky not to be washed away on one of our beach camps), it was still warm enough on some days for shorts and flip-flops (prompting more strange looks from the locals who thought it was freezing).

Craig went off on his bike to tackle some of the islands mountains while I let the horses do the hard work on my explorations. I found a riding stables in Sami with beautiful, sure-footed Haflinger horses and had a couple of great hacks, one up into the mountains (on incredibly steep, rocky paths that I was amazed we could ride up) and one down to the beach where the horses got to have a splash in the sea.

Over in Lixouri at another riding stables we were told we should visit a farm which had Appaloosa horses. Now I do love riding but I’m not really that interested in horses so I had no idea what an Appaloosa was. What swung it for us was the fact that there was a young New Zealand couple staying at the farm and we were in desperate need of a good chat and maybe a beer or two with some fellow travellers (traveling in winter can get a bit lonely). The owner let us park up and stay for a couple of days so we got to hang out with Jenna and Tyler, Caterina (the owner), her seven dogs, 50 cats and of course, the Appaloosa’s (which I now know to be an American horse breed best known for its colorful spotted coat pattern).

Having dosed up on card games, chat, local wine, table tennis and Caterina’s mum’s cooking we left Jenna and Tyler to their WWOOF’ing ** and made our way back across the island to catch the ferry to Killini. We had a great time in Kefalonia and met some lovely people but what we’ll probably remember most are the few mishaps we had along the way…..

– momo got a flat battery (for no apparent reason). Lucky for us we were parked on a slight slope as it’s not easy to push start a 3.5 tonne vehicle. Then in a bizarre coincidence the woman I had been riding with that day parked in exactly the same spot after us and also came back to a flat battery – weird!

–  we had a run in with some thieving teenagers (in Lidl of all places!). They were pulling the coins out of the trolley when your back was turned (not a bad earner when you add up all those 50 cent pieces!). Craig confronted them but the cheeky buggers wouldn’t give him his 50p back 😉

– we got momo stuck in the mud and had to be pulled out by a tractor (the lesson here is when you’re in a motorhome, don’t drive down narrow dirt tracks that you are not familiar with)

**For those that have not encountered the term WWOOF’ing, it means this: ‘World Wide Opportunities on Organic Farms’, or ‘Willing Workers on Organic Farms’. It’s basically an exchange programme where people work on the farms in exchange for room and board. It’s a popular for those who want to experience working in different countries and also a good way to travel on a budget.

A beautiful day on Antisamos beach. 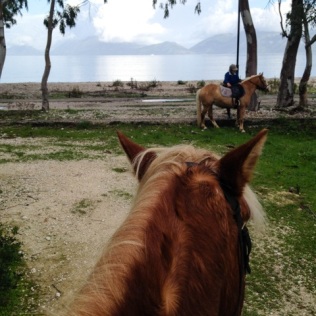 4 hour beach ride, my longest time in the saddle so far.

Kamini beach after an epic bat and ball tournament.

Getting in the Christmas spirit at Petani beach. 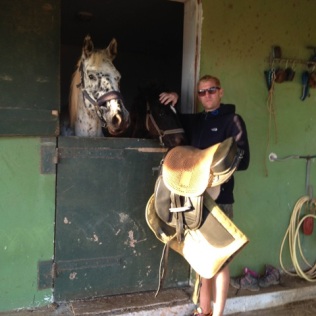 Craig being stablehand at the farm. 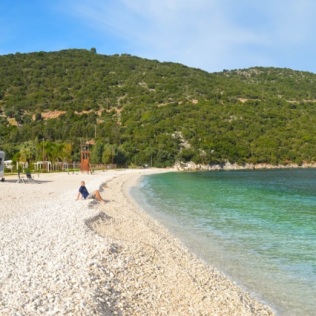 Our free camping spot of choice where we nearly got washed away in a storm!

A haflinger horse, small but sturdy!

If I’m wearing shorts then you know it’s warm 🙂

Our morning view at Kaminie beach.

Lixouri, walking along the harbour waiting for the pizza restaurant to open. 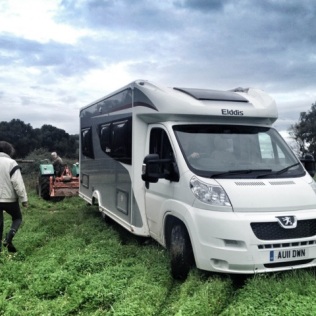 Silvana and her husband to the rescue! 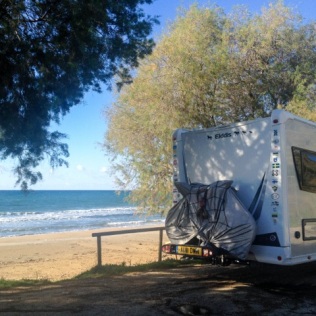 Scene of the crime – one lost doormat.