Our first stop in Croatia was the Plitvice Lakes National Park, we’d seen photos of the lakes online and they looked stunning – unfortunately for us we arrived to a landscape obscured by fog and drizzle and many of the boardwalks around the lakes had been closed off due to flooding. Not one to be put off by petty bureaucratic health and safety issues, Craig just stepped over the ‘no entry’ signs and I followed timidly behind, worrying about getting a telling off from the park staff. I soon relaxed once we found that half of the park tourists were also cheerfully ignoring the signs and even started to enjoy the mutual camaraderie that accompanied a group of strangers all breaking the rules and getting soaked feet together.

There’s a lot of North Face going on in this photo….

Found some cool salamanders in the forest.

After a soggy few days in Plitvice we were happy to discover that the closer we got to the coast, the warmer it got and by the time we arrived in Paklenica we were up to a comfortable sunbathing temperature. The campsite was right by the sea (which was just about warm enough for a dip if you were feeling brave) and the National Park was within walking distance with plenty of hills around to keep Craig and his bike happy.

We were so impressed with our surroundings that we booked ourselves onto a boat trip to visit the marine national park and the islands within it……..big mistake! In the morning we were driven to the port by our tour rep who delighted in telling us stories of speeding tickets she’d avoided (by flirting with traffic police) whilst she fiddled with the stereo, strayed into the opposite lane on every bend and sped along at over a ton. Once that ordeal was over we were subjected to 3 hours of sitting on a boat with bugger all to look at, an hour of snorkelling in chilly water with bugger all to look at, a stop off at an island with bugger all to look at and a return journey with more of the same. We were almost happy to see our crazy tour rep again for the drive home, getting in a car with her was potentially life threatening but at least it was entertaining!

Thoroughly bored on the boat.

To make up for our rather dull experience in the marine park, we decided to see what the Paklenica national park had to offer and set off for a gentle hike in the hills. We watched the rock climbers, saw a baby viper and had a nice walk along the river. Because we both dislike walking back the same way we have come, we decided to follow a side track in the hope it would loop round back to the entrance of the park. It didn’t, instead we hiked up, up, up and out of the park and then had to follow a road going down, down, down. It was at such a steep incline that we had to alternate walking forwards and backwards, partly because our thighs ached but also to save our toes which were getting smashed into the front of our boots with every step. Our ‘gentle’ hike turned out to be 5 hours and 21 km long and the harsh downhill section left our legs so sore we nearly fell out of the motorhome the next morning. 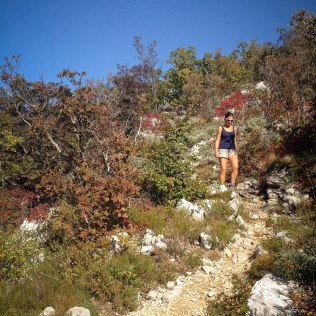 Still quite happy at this point. 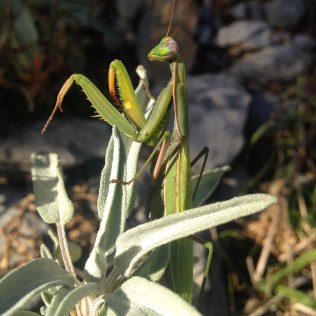 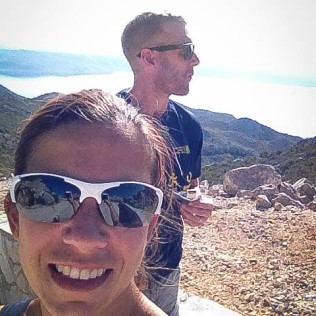 Snack break on the never-ending downhill.

More on Croatia in part 2!